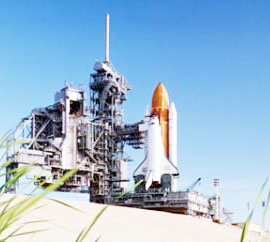 NASA has had trouble getting this mission going. It was first scheduled for September, but faulty wiring delayed the mission until now. Last week there were more complications, this time with fuel pump seals. One of the seals was faulty, but it still made it through inspection and onto the shuttle's engine. After replacing the seal, scientists say the shuttle is ready for launch.

"We're not launching with a problem," a NASA official said. "We're launching with what was a potential problem that we have cleared and is no issue."

The mission will use special radar equipment to penetrate through clouds. We currently have a better map of Venus than Earth, because intense cloud cover shields the surface. Weather will no longer be a factor.

"It's been suggested this data set will be used by more people on earth than all the data NASA's ever collected," said Howard Eisen of the Radar Mapping Team.