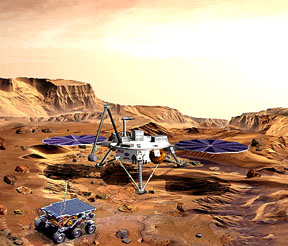 "We are evaluating the implications of a two-rover option," Dr. Weiler said. Dr. Weiler is the scientist that made the decision. "I intend to make a decision in the next few weeks so that, if the decision is to proceed with two rovers, we can meet the development schedule for a 2003 launch."