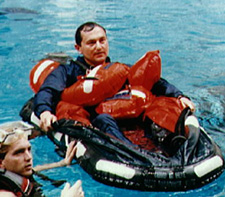 The Mir space station has been plagued with problems in the last months. In February, the crew battled a fire that had burst from an oxygen canister. In March and April, Mir experienced oxygen and cooling system breakdowns and leaks. The serious collision in June shattered the quiet month of May that Mir had. July and August brought their own onset of problems: Commander Tsibliyev's heart problems and a computer system failure.

Finally, Mir seems to be enjoying the calm after the storm! The oxygen system aboard Mir has been fixed. The internal spacewalk that occurred this past week was successful in reattaching the power cables that were severed in the June collision.

The two cosmonauts and one U.S. astronaut aboard Mir have placed a strange amount of confidence in their damaged home. When reflecting on their current situation and recent spacewalk, Foale said, "This is a super day. We carried out everything we set out to do and more. This is an excellent demonstration of how fixable the...system is here on the space station Mir. Well done, everybody!"