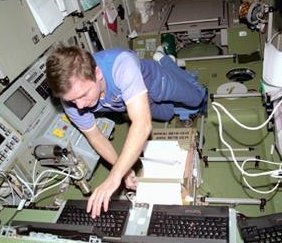 On December 13, the ISS crew learned it will be spending an extra two weeks aboard the station because of some thruster replacements needed on the shuttle Discovery. So, now the shuttle Discovery will come to the ISS the first week of March. It will bring three new crew members that will stay for four months...and it will bring the three current residents of ISS home!

The STS-98 mission is still slated to bring the U.S. Destiny Laboratory to the ISS in January. The new laboratory will quickly become the focal point of the station.

The International Space Station (ISS) is a very large space station in orbit around Earth. The ISS is currently inhabited and in use, but it is also under construction; new modules are gradually being...more