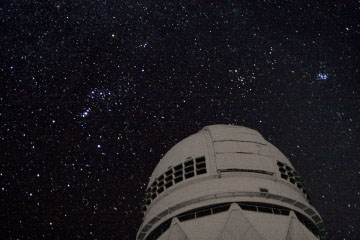 The grand opening ceremony of International Year of Astronomy 2009 (IYA 2009) is being held at the United Nations Educational, Scientific and Cultural Organization (UNESCO) headquarters in Paris, France, on Jan. 15 and 16, 2009. The National Science Foundation (NSF) has devoted millions of dollars to underwrite IYA 2009 activities and initiatives.

IYA 2009 is a global celebration of astronomy and its contribution to society and culture, with strong emphasis on education, public participation and the involvement of young people, and with events at national, regional and global levels. Representatives from more than 135 countries are already involved, forming the world's largest ever astronomy network.

As is consistent with its historic commitment to ground-based astronomy, NSF's involvement in the Galileoscope Project, an official cornerstone and perhaps the most visible project of IYA 2009, is considerable. The Galileoscope will enable children to experience observation via a sophisticated yet affordable ($10/each) telescope. Working with two of the best optical designers in the world, and facilitated by Rick Fienberg, editor of Sky and Telescope magazine, and Stephen Pompea, project director for the NSF-funded Hands-On Optics, the Galileoscope creates a true-color corrected view through a high quality eyepiece in a telescope with a baffle design optimized for looking at bright objects like the Moon and planets. "Hands-On Optics" teaching kits are part of a 4-year NSF-sponsored project used by over 20,000 students nationwide, mainly in after-school settings.

NSF has contributed more than $2 million for the production and dissemination of "400 Years of the Telescope," an interactive, multimedia project that will provide an integrated set of informal science learning experiences, enabling the public to participate in real and virtual telescope experiences, understand the far reaching advances that the telescope has made possible, and discover how technology, science, and society are interconnected. NSF has provided support for the partnership of PBS (Southern Oregon Public Television - SOPTV), Interstellar Studios, leading astronomers and science writers, and the Astronomical Society of the Pacific, as well as two of the United States' premier planetariums: the Buhl Planetarium at the Carnegie Science Center and 'Imiloa Astronomy Center of Hawai'i. This two-hour, high-definition documentary will air twice on PBS in 2009. A full-dome and traditional 30 minute planetarium program will be made available in 12 foreign languages, with free national and international distribution to 750 planetariums throughout the United States.

The Windows to the Universe project at the NSF-funded University Corporation for Atmospheric Research (UCAR), has organized The Great World Wide Star Count, in conjunction with planetariums and scientific societies across the country and abroad. Their 2007 and 2008 star count campaigns drew over 10,000 observations taken in all seven continents from 60 countries around the world. UCAR used last year's observations to generate maps of star visibility around the world.

NSF has been a leading supporter for the U.S. National Node for IYA 2009. The agency provides ongoing support for the American Astronomical Society and its partner organizations to develop a comprehensive program of activities for the IYA 2009 in the United States that are consistent with the overall International Astronomical Union goals. These programs will enable the distribution of current and accurate astronomical research results to the public.

The release of sulfur and nitrogen into the atmosphere by power plants and agricultural activities--commonly referred to as acid rain--plays a minor role in making the ocean more acidic on a global scale,...more