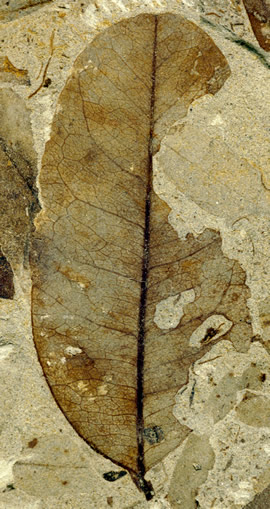 More than 55 million years ago, the Earth experienced a rapid jump in global carbon dioxide levels that raised temperatures across the planet. Now, researchers studying plants from that time have found that the rising temperatures may have boosted the foraging of insects. As modern temperatures continue to rise, the researchers believe the planet could see increasing crop damage and forest devastation.

"Our study convincingly shows that there is a link between temperature and insect feeding on leaves," said lead author Ellen Currano of Pennsylvania State University and the Smithsonian Institution. "When temperature increases, the diversity of insect feeding damage on plant species also increases."

With support from the National Science Foundation (NSF), Currano collected the study fossils from the badlands of Wyoming, gathering more than 5,000 fossil leaves from five sites representing time zones before, during and after the roughly 100,000 year temperature spike called the Paleocene-Eocene Thermal Maximum (PETM).

The researchers found that the PETM plants were noticeably more damaged than fossil plants before and after that period. The PETM plants, many of which are legumes -- the family that now includes beans and peas -- show damage with greater frequency, greater variety (such as mining, galling, surface feeding and other assaults) and a more destructive character than plants from the surrounding geologic time periods.

"This study shows that insects responded rapidly to a major change in climate during the PETM," said Enriqueta Barrera, program director in NSF's Division of Earth Sciences, which helped fund the project. "This is in agreement with previous findings by [co-author] Scott Wing of the Smithsonian Institution who found that plants that previously were common much farther south migrated northward at this time"

In order to test alternative reasons for the increased damage, the researchers looked at whether the plants in the analysis had key traits that made them more palatable to insects. However, after using established analytical techniques to measure various leaf structures in all of the specimens, the researchers concluded that the PETM plants do not appear to vary structurally from the plants in the rock layers above and below the temperature spike.

The researchers also looked to see if the insect species feeding on the leaves changed over the time period. The analysis showed that what changed was the abundance of insect species that are highly specialized in the type of plant they consume and the way they consume it, such as leaf miners and gallers - they are far more abundant in the PETM.

"We wanted to see whether the increase in insect damage during the PETM was because the leaves were less tough or more nutritious," said Currano. "There is no evidence to support this. Instead, we think that the warming allowed insect species from the tropics, particularly those that feed in a highly specific manner, to migrate north. "

Biologists are already aware that insects in the tropics consume more plants and that warming temperatures are causing organisms to widen their ranges. In addition, research has shown that plants grown under higher concentrations of carbon dioxide (CO 2 ) are less nutritious, so insects must eat more plant tissue to get the same sustenance. These earlier studies support the recent findings about the PETM.

Because food webs that involve plant-eating insects affect as much as three quarters of organisms on Earth, the researchers believe that the current increase in temperature could have a profound impact on present ecosystems, and potentially to crops, if the pattern holds true in modern times.

"This study represents a highly integrative approach, using well-studied systems, to model ecological dynamics during upcoming climate shifts," said William Hahn, a program director in NSF's Division of Graduate Education who supported Currano's work with a research fellowship. "The truly relevant description of past climate-change effects on plant-insect interactions, specifically the probability of increased insect damage to plants with rising temperatures, is a forward-looking approach that will help us prepare for the effects of future global warming," he added.

In addition to Currano's Graduate Research Fellowship, the research team was supported by grants from NSF's Division of Earth Sciences, as well as funding from the Roland Brown Fund of the Smithsonian's National Museum of Natural History, the Evolving Earth Foundation, the Paleontological Society, Penn State, the Petroleum Research Fund, the David and Lucile Packard Foundation and the University of Pennsylvania.