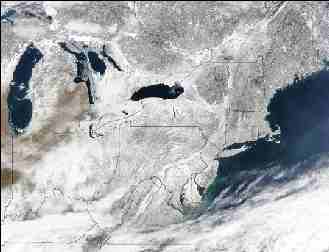 Last year, winter in the Northeast United States was mild with very little snow. This year, however, there is tons of the white fluffy stuff! Several winter snowstorms have rumbled through the Eastern part of the United States, with one in mid-February dumping record, or near record, amounts of snow in Washington, D.C., Baltimore, Philadelphia, New York City, and Boston. In New York City a total of 42 inches has fallen so far this winter. Even more snow has fallen in parts of Massachusetts and upstate New York with total snowfall more than 100 inches in some areas.

Why is there so much snow this winter? The culprit that is bringing this winter weather is called North Atlantic Oscillation, or NAO for short. This climate phenomenon controls the intensity of winter weather with changes in the air pressure gradient between Iceland and the Azores.

The changes in air pressure of the NAO are one of the most common causes of climate variation on Earth. A low-pressure system over Iceland pulls cold air down from the Arctic. It mixes with a high-pressure system that pulls moist air up from the Caribbean. These pressure systems are present more or less all year, but they become stronger and weaker at times. During most seasons they are weak, but in winter they can strengthen. When the pressure difference between the high and low is large, moisture from the high-pressure system hits the cold air from the Arctic and produces many snowstorms, some of which roll towards the East coast of the United States. It sets up a situation where youve got a lot of moisture hitting cold air, and that is a recipe for snow, says David Adamec, a climate scientist at NASAs Goddard Space Flight Center.

What can you do about winter weather? Well, you cant change the weather! But the NOAA National Weather Service recommends that people listen to weather reports on the radio and television to make sure they know what sort of weather may be coming.