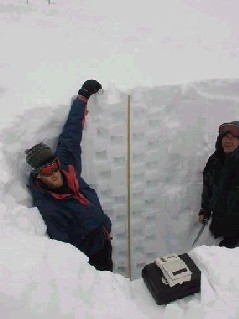 Snow is fun! It can be made into snowballs or snow angels, and, in large amounts, it can even cancel schools. Some scientists think that snow is pretty interesting too. This week many scientists and college students began a project to take a look at snow in Colorados Rocky Mountains from many different points of view - from the ground, from the air, and even from space!

The scientists hope that their project, called the 2003 Cold Land Processes Experiment (CLPX), will help us better understand areas on Earth where water is frozen, either seasonally or permanently. This frozen water is known as the cryosphere.

They hope to improve forecasts of the spring water supply for communities that depend on river water near the mountains, most of which comes from melting snow. They also hope to better predict dangerous snowmelt floods that happen in the spring as the snow melts. They also will study how snow cover affects other aspects of the Earths weather and climate.

During this project, scientists will try to figure out the best way to study the cryosphere from above. Four aircraft and NASAs Terra and Aqua satellites will gather snow data by sensing whats below. Scientists will compare data collected from the ground with data collected from the sky to determine whether the satellite data is accurate. Hopefully, their research will help design better sensors to measure the water content of snow from space. Researchers hope to be able to someday measure, from space, the amount of snow and frozen ground on Earth.

This project is jointly sponsored by NASA and NOAA (The National Oceanic and Atmospheric Administration) and also involves scientists and students from several other federal agencies and many universities. They will collect data in the Colorado Rockies from February 19-25 and from March 25-31, 2003.