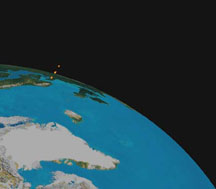 New evidence has just been found that supports the theory of interplanetary snowballs spraying the Earth's upper atmosphere. NASA's Polar spacecraft and its Visible Imaging System (VIS) are responsible for the findings.

Dr. Louis Frank of the University of Iowa led the team in research endeavors. The research team found that these snowballs could be up to the size of a small house! They are not however dangerous to life on Earth, because the snowballs disintegrate while they are still in the upper atmosphere. Frank noted, "They break up and are destroyed at 600 to 5,000 miles above the Earth. In fact, this relatively gentle 'cosmic rain' --which possibly contains simple organic compounds--may well have nurtured the development of life on our planet."

The objects, though they may contain organic material, are mostly composed of water. They are thought to be comet-like objects which contain frozen water, and so are termed "dirty snowballs." These snowballs are entering the atmosphere at a rate of 5-30 snowballs per minute, or thousands of snowballs in a given day.

Though this finding is still somewhat controversial, these objects may explain the existence of previously found "atmospheric holes." What is not controversial is the success of the Polar spacecraft's first year in orbit.

It was in the early 80's that the Small Comet theory came into being. During this time, Louis A. Frank working with John Sigwarth noticed black spots on Dynamics Explorer I's data. Reluctant to just ignore...more