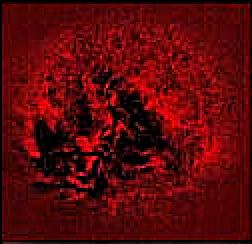 This gives a week to two weeks warning," said Douglas Braun, a solar physicist and co-author of a study appearing Friday in the journal Science. "Such a prediction could be important because it would give time to warn the crew of a manned mission to Mars, or astronauts working outside the International Space Station."

The Solar and Heliospheric Observatory (SOHO) caught a rare view of the far side of the Sun. If solar activity is found by the satellite before that side of the Sun faces Earth, then scientists can forecast...more