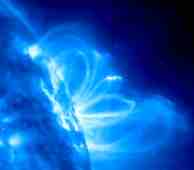 Even though they are far away, solar storms can affect us. They can disrupt our spacecraft and electrical power systems. So, figuring out how they happen and how we can predict them is important to NASA and space organizations worldwide.

While loops have been observed before, these vibrating loops, rocking back and forth every 20 minutes, are a new discovery. Scientists believe that the vibrations probably happen when very energetic particles bursts into the loop from low in the Suns atmosphere. If these bursts of particles are very strong, they may disrupt the loop and cause a solar flare. So, the lower atmosphere of the sun might be the cause of violent solar activity.

No one had seen these vibrating loops before because the necessary tools did not exist. The vibrations were seen with a special instrument on the Solar and Heliospheric Observatory (or SOHO) called SUMER (Solar Ultraviolet Measurements of Emitted Radiation). Since no one knew about the vibrating loops before the instrument was made, it was not made specifically for that purpose. To be honest, said Dr. Werner Curdt, who is in charge of SUMER, when SUMER was built, we didnt expect anything as amazing as this.