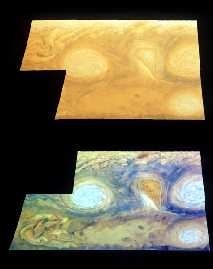 The Merging of White Ovals BC and DE

The final fate of white ovals is to merge together, or to just fade away, as oval FA , seems to have done. It is not often that ovals merge, however. Most often they come close enough to jostle, but ultimately repel each other, as many others have done.

In 1998, two of the three classic white ovals, BC and DE, merged to form a single oval called BE. The picture shows the sequence of events captured by the Hubble Space Telescope. Scientists will use the merging of these white ovals to understand more about the underlying currents in the system, and other details of the weather of Jupiter.