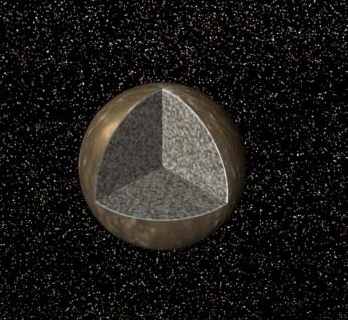 This drawing shows the possible interior of Callisto.
NASA

At the same time, there were some measurements that suggested that there might be a thin salty-slushy layer of watery-ice that creates current. Water supports current. That is why people dont drop electric appliances into the bathtub! An instrument on the spacecraft that is sensitive to current measured something that, like on Callisto, suggested a watery layer was present on Ganymede and Europa as well.

This is a picture that shows the interiors of Io, Europa, Ganymede and Callisto together.

The Galileo spacecraft, which has been orbiting Jupiter since 1995, has finally reached the end of its road. On September 21, 2003, Galileo will make a fiery plunge into Jupiter's atmosphere and be vaporized....more