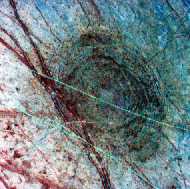 The surface of Europa shows many signs of that there may be a submerged ocean. For example, this crater looks as if it was created by something that fell into a slushy layer. Other signs of a submerged ocean include: * flooded terrain * 'freckles' * rafting, and * spreading ridges.
Last modified September 19, 2003 by Roberta Johnson.