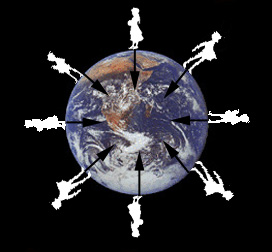 Well, the fact is, we are all standing at odd angles around the Earth. It just doesn't feel like it because of the force called gravity. Gravity was first "discovered" by Newton. Newton's Law of Gravity says that every body in the universe attracts every other body with a force proportional to the product of their masses and inversely proportional to the square of the distance between them: F=Gm1m2/r2. So, you are pulling on the Earth just as hard as it is pulling on you! However, since your mass is so much smaller than that of the Earth, you do not affect its motion at all. However, the Earth, because of its mass, has a very large pull on you. This pull is what keeps us all from flying off into space.