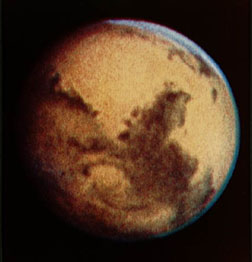 This composite image was taken by the Hubble Space Telescope.
Click on image for full size
Courtesy of NASA

In 1659, Christian Huygens discovered a strange feature on the surface of the Red Planet. It was later called the Syrtis Major. Fear of Martian invasion has been in society ever since. In 1802, one scientist was so convinced there was life on Mars that he wanted to draw huge figures in the snow to signal the Martians!

In 1877, astronomer Giovanni Schiaparelli discovered what he believed to be several lines crossing one another. He claimed they were water canals made by intelligent creatures. His work spawned many science fiction books and movies, such as H.G. Wells' War of the Worlds. Eventually, we sent spacecraft to investigate the Red Planet.

In 1975, two spacecraft named Viking I and II landed on Mars to study its surface. They analyzed the rocks and soil of the planet while providing us with information about its atmosphere and weather patterns. Even today we are exploring Mars. The Mars Global Surveyor made a detailed 3-dimensional map of the planet. Unfortunately, the loss of the Mars Climate Orbiter and the Mars Polar Lander has been a big setback in our research.

The Viking missions to Mars were part of a series of U.S. efforts to explore and better understand the red planet. Each Viking spacecraft consisted of an orbiter and lander. The landers were sterilized...more

The Mars '98 mission was designed to be a study of Martian climate, weather, and surface properties at the Martian south pole. Mars '98 was supposed to build upon the discoveries of the Mars Pathfinder...more