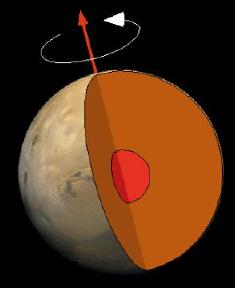 These data suggest that Mars has a large solid core, as shown in the figure to the left. (The figure is a rough drawing and is not meant to show the detailed shape of the core). These findings help address questions which remain about Mars, and contribute to the overall results returned by the Mars Pathfinder mission.

An important new result from the Mars Global Surveyor (MGS) mission is the definite confirmation of the presence of a magnetosphere around Mars. Previous missions made inconclusive measurements of the...more