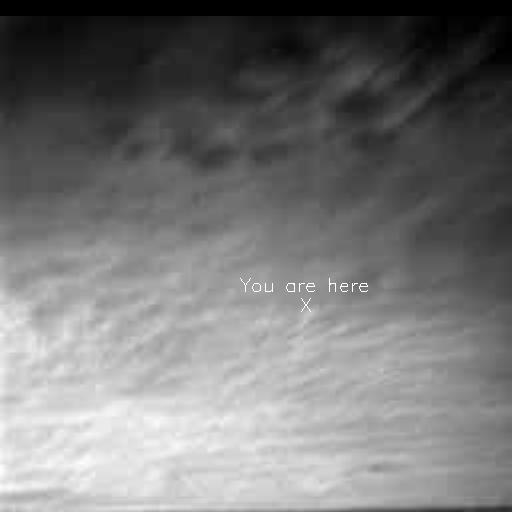 This is the first image ever taken from the surface of Mars of an overcast sky. Featured are stratus clouds at an approximate height of ten miles (16 kilometers) above the surface. The "you are here" notation marks where Earth was situated in the sky at the time the image was taken. Scientists had hoped to see Earth in this image, but the cloudy conditions prevented a clear viewing. The clouds consist of water ice condensed on reddish dust particles suspended in the atmosphere. Clouds on Mars are sometimes localized and can sometimes cover entire regions, but have not yet been observed to cover the entire planet. The image was taken about an hour and forty minutes before sunrise by the Imager for Mars Pathfinder (IMP). Courtesy of NASA.
Image from: JPL/NASA