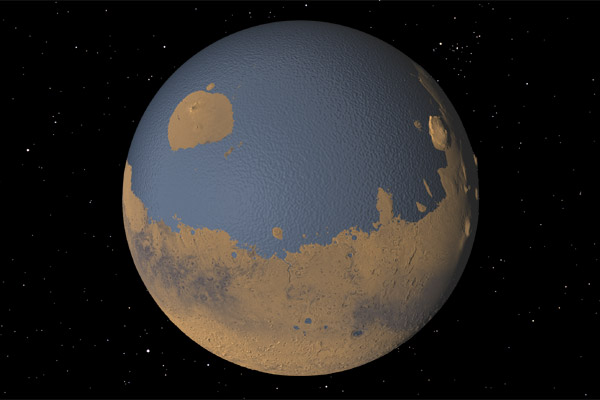 Were there ever oceans on Mars? This picture shows how Mars might look if it had oceans. The climate on Earth changes over time. The climate on Mars changes too! The orbit of Mars changes a bit, and so does the tilt of the spin axis of Mars. Those cause changes in the climate on Mars. Sometimes it has been warmer. Sometimes it has been colder. Maybe Mars had oceans in the past during a warmer, wetter period. If Mars had an ocean, it would be in the north. On Mars, the south is much higher up than the north. Water would flow to the low regions around the North Pole, forming an ocean there. Scientists think the northern plains of Mars are a good place to search for water today. Life on Earth needs water, so maybe life on Mars would too. The northern plains seem like a good place to search for life, too. Maybe there was ocean life there in the past. Maybe some of it even survived after the oceans went away.
Image courtesy of NASA/Goddard Space Flight Center Scientific Visualization Studio.