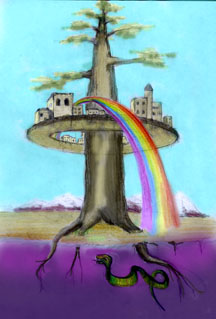 Bifrost, the rainbow, was the bridge leading from the Earth, called Midgard, to Asgard, the home of the gods.

Only the gods could cross this bridge, which was guarded by the god Heimdall. This bridge has also been associated with the Milky Way.

It was said that during the very last battle between good and evil, Bifrost shattered from the weight of the monsters.