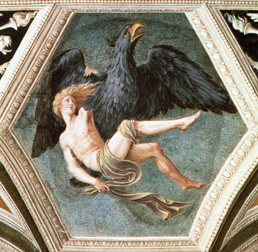 Ganymede was a son of Tros, first king of the classical land known as Troy. One day Jupiter caught a glimpse of the handsome young boy as he was tending sheep on Mt. Ida, and was suddenly inflamed with a passion for him.

Jupiter thereby changed his shape into that of an eagle, swooped down onto the craggy slopes of Ida, and carried the boy off to Mt. Olympus, home of the gods, to serve as the cup bearer of the gods. Now it so happens that this position was already filled by Hebe, the daughter of Jupiter and his wife Juno. Once Ganymede arrived at the royal court there began a furious competition between Hebe and Ganymede for the honor of serving the gods.

Eventually Ganymede won the post, and stayed on also as the beloved companion to Jupiter. Ganymede's father, Tros, mourned for his son because he did not know what happened. Jupiter felt sorry for him, and gave the father special horses that only gods could ride upon. He also made Hermes explain the entire story, including the honor of becoming immortal.