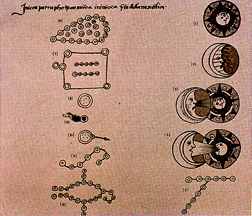 The Pleiades were known to the Aztecs as Tianquiztli which means the "marketplace." The Pleiades marked for the Aztecs the fifth cardinal point. The Aztecs were very sophisticated observers of the movements of planets and stars in the sky. Time was measured by the Aztecs according to the movement of the Sun and stars.

Their calendar was based on cycles of fifty-two years. At the end of each cycle, a religious ceremony would take place to ensure the movement of the cosmos and the rebirth of the Sun. Aztecs believed that they could prevent the demons of darkness from descending to Earth and devouring men, by offering to the gods human sacrifices. During the ceremony, the priests would watch with anxiety the passage of the Pleiades (Tianquiztli) through the overhead position at midnight.

The crossing of the meridian by the Pleiades signaled that the cosmos did not interrupt their movement, and the world would not end then. Another fifty-two years of life were thus secured. At that specific moment, the Aztec priests would start a small fire on the slashed chest of the victim. The same fire was then carried to the temple of the Sun god Huitzilopochtli, and to the homes of the Aztec people.