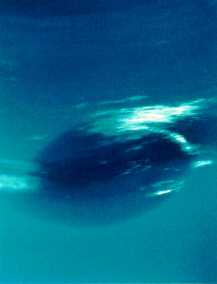 This is an image of Neptune's Great Dark Spot of 1989.
Click on image for full size
NASA

The Great Red Spot of Jupiter is thought to be a hurricane which has been raging on Jupiter for at least 400 years. The Great Dark Spot, seen here by Voyager in 1989, disappeared in 1994, and was replaced very soon by a similar "Spot" in the north instead of in the south.