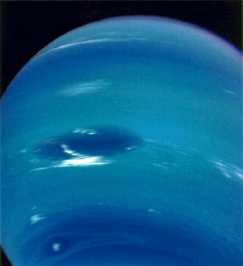 This is an image of Neptune, and shows the Great Dark Spot.
Click on image for full size
NASA

Like Jupiter and all the giant planets, Neptune's appearance shows a striped pattern of clouds. Other cloud shapes seen over time include a small dark spot, the "scooter" and the Great Dark Spot. The Great Dark Spot is the largest of the cloud patterns on Neptune. There are also clouds which are similar to recognizable Earth clouds. The clouds are found low in the atmosphere of Neptune.

The atmosphere of Neptune is mostly made of a complex molecule called methane.

Hazes of smog on Neptune, made of methane and other, even more complex molecules, are to be found very high up, above the clouds of Neptune.