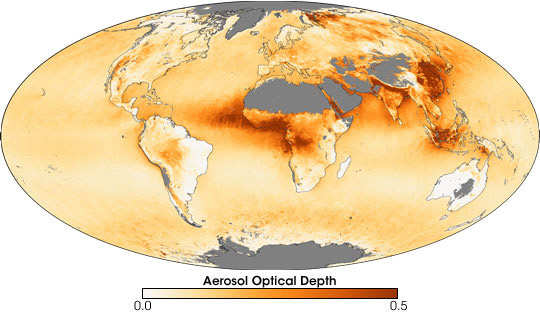 Aerosols are tiny particles, such as soot or dust, suspended in Earth's atmosphere. In addition to their air-quality impacts, aerosols can interfere with sunlight reaching the planet's surface. Scientists often talk about aerosols in terms of their optical depth, which indicates how much incoming sunlight aerosols prevent from reaching the Earth's surface. The Moderate Resolution Imaging Spectroradiometer (MODIS) flying on NASA's Terra and Aqua satellites can detect aerosols, and this image shows the annual mean aerosol optical depth for 2006, based on daily measurements made by MODIS. White represents little or no aerosol interference with sunlight, and dark orange indicates considerable interference. Areas where data could not be collected appear in gray.
Image Courtesy of Reto Stockli, NASA's Earth Observatory