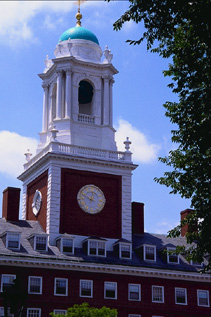 Harvard University Clock Tower - the school at which Leavitt did her research.
Click on image for full size
Courtesy of Corel Photography

Henrietta Swan Leavitt was born in Lancaster, Massachusetts in 1868. She became interested in science and astronomy in college. Unfortunately, she became quite ill after her graduation from college. She spent several years at home recovering from the illness which left her almost completely deaf. But she hadn't forgotten astronomy!

She volunteered at Harvard College's Observatory, until she was hired permanently at the salary of 30 cents an hour. At the observatory, she observed stars and watched how variable stars changed in brightness over time. Henrietta is known for her 1904 discovery of a type of variable stars named cepheid variables. Cepheid variables are stars that go through cycles of brightness and darkness. Henrietta found that when observing a cepheid variable in another galaxy, she could relate the length of the brightness cycle to the size of the star. With this discovery, she was able to determine the distances between stars and the Earth. Cepheid variables are referred to as "astronomical yardsticks" as they make it easier to measure distances within the universe.

She died of cancer in 1921 at age fifty-three. Her name was given to a crater of the moon to honor deaf men and women who have worked as astronomers and scientists.

Hipparchus was a Greek astronomer who lived between 190-120 B.C. He created the first accurate star map and kept a catalogue of over 850 stars with their relative magnitudes. The system of epicycles describing...more