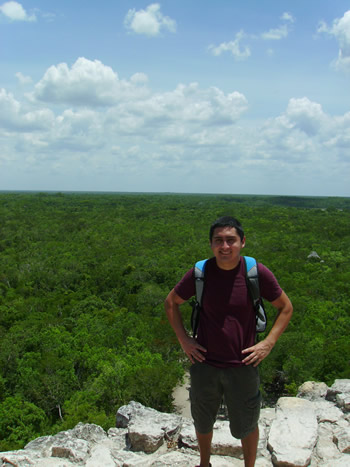 When you are from a country (Chile) with volcanoes everywhere, frequent earthquakes, more than 4000 km of coast and a diverse geography, being interested in earth sciences since you are a kid it is not a surprise.

As an electrical engineering student I took some elective courses in atmospheric sciences in order to try to understand the physical mechanisms involved in everyday processes. I was very impressed with how the same electromagnetic laws we use in electrical engineering could be applied to describe some atmospheric phenomena. It was natural that after getting my bachelors degree I pursued a masters degree in atmospheric sciences in my hometown of Santiago, Chile.

When I was working as a researcher at my former university I decided to move to the United States to start my PhD training in atmospheric sciences working with Dr. Paquita Zuidema at University of Miami.

Currently, I am studying the radiative properties of the warm clouds along the Chile and Peru coast. I am looking at how we can use satellite observation to have a better understanding of these clouds. Scientists are interested in studying these particular clouds due to the significant reflectivity of the incoming solar energy (radiation).

During VOCALS I will be measuring microwave radiation of the clouds using instrumentation on both ships and aircraft. The objective is to use the collected data to obtain estimates of the liquid water and to determine how well the satellite observations can match the in-situ observations.

During my free time I enjoy reading Latin-American literature, hiking, and contemplating the spectacular sunsets in South Florida. When I visit my country, I enjoy hiking in the mountains and spending time with my family.