Shown here are four representations chemists use for ammonia. In the colored models, nitrogen is blue and hydrogen is white.
Click on image for full size
Windows to the Universe original artwork by Randy Russell.

Ammonia is a chemical compound that is a colorless, flammable gas at normal temperatures and pressures. Ammonia is toxic, corrosive to some materials, and has a pungent odor. An ammonia molecule (NH3) contains three hydrogen atoms and one nitrogen atom.

Ammonia is found in small quantities in Earth's atmosphere. It is produced by the decay of animal and vegetable matter that contains nitrogen.

Nitrogen-fixing microbes convert nitrogen in the air into ammonia in the soil as part of the Nitrogen Cycle. This makes the nitrogen, a key ingredient in the chemistry of life, available to plants and other organisms.

Ammonia sometimes also plays a role in removing acids from Earth's atmosphere. Ammonia reacts with nitric acid and sulfuric acid to form particulate or aerosol nitrate and sulfate, removing the acids from the atmosphere within a few days of the acids' creation. 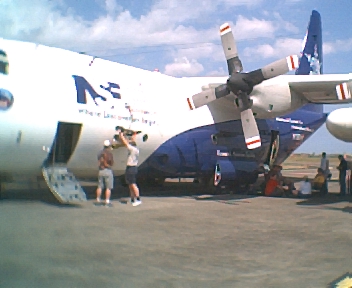 This picture shows us getting ready for the first local flight of the NCAR/NSF C-130 flying out of Veracruz. We flew toward Mexico City, did some measurements in the Mexico City basin, and then flew West...more