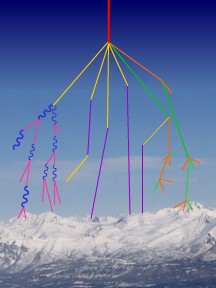 Cosmic rays are a type of radiation that comes from space. Cosmic rays aren't really "rays". T hey are particles (mostly protons) with very high energies. Cosmic rays come from various places, including the Sun, supernova explosions, and extremely distant sources such as radio galaxies and quasars. Because of their high energy, this type of particle radiation can be dangerous to people and to machines. On Earth we are mostly shielded from them by our planet's magnetic field and atmosphere.

Cosmic rays were discovered by the Austrian-American physicist Victor Hess. Hess discovered this new type of radiation in 1912. He won the 1936 Nobel Prize in Physics for this discovery.

What kinds of particles make up cosmic rays? Cosmic rays are made from different kinds of subatomic particles. That means they are particles that are parts of atoms or are smaller than atoms. Most cosmic rays are protons. Others are made from the nucleus of some kind of atom, so they have protons and neutrons in them. The most common is the nucleus of a helium atom, which has 2 protons and 2 neutrons (and is also called an alpha particle). Others are nuclei of carbon, oxygen, iron, calcium, and other types of atoms. A small number of cosmic rays are electrons. No matter what they are made of, cosmic rays move really fast and have a lot of energy!

Since cosmic rays are a kind of radiation, they can hurt people and machines. Lucky for us, Earth's magnetic field and atmosphere protect us from most cosmic rays. On average, people get hit with about 2.3 millisieverts of radiation each year. A millisievert is a unit for measuring radiation. It is abbreviated mSv. Cosmic rays make up about 0.2 mSv of the radiation we get each year. That isn't very much; less than 10% of the total. Astronauts do have to worry about cosmic rays, though. If astronauts travel away from Earth (to the Moon or Mars, for example), they aren't protected by Earth's magnetic field any more. They could get hit by as much as 900 mSv of cosmic ray radiation in a year! Cosmic rays can damage our DNA and cause cancer and radiation sickness. Scientists will have to figure out how to protect astronauts from cosmic rays before we can send a mission to Mars.

Earth doesn't always get hit by the same number of cosmic rays. Strangely, cosmic rays are less of a problem when the Sun is most active. Sometimes there are more solar flares and other "space weather storms"; sometimes there are fewer. The Sun has a cycle that is 11 years long. At "solar max" the Sun is very active; at "solar min" there are very few "storms" on the Sun. Since some cosmic rays come from the Sun, you might think that there is more danger from cosmic rays when the Sun is active. Good guess; but wrong! When the Sun is active, it "puffs up" its heliosphere. Like Earth's magnetic field, the Sun's magnetic field helps shield us from galactic and extragalactic cosmic rays. So an active Sun means better shielding! So, if you're an astronaut, the best time to be going on a long trip in space is when the Sun is most active.