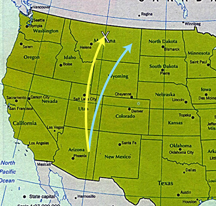 To understand what the Coriolis effect is, let's imagine that you're on the top of a mountain in Arizona and you have a cannon. You want to fire a cannonball and hit a flag pole that's on the top of another mountain due north of you in Montana, almost a thousand miles (1600 km) away. If the Earth weren't rotating you would want to point your cannon due north.

Now, the flag pole in Montana is also moving eastward but not as fast. Why? Because it doesn't have as far to go. This is easiest to understand if you look at a globe. Every point on the surface of the Earth spins around toward the east and returns to the same place every 24 hours. A place near the equator has a long way to go - it has to make a big circle all the way around the Earth. However, a point near the north pole only has to make a little circle around the pole to get back to where it started. Since both points need to complete their journey in 24 hours, the one near the equator has to move much faster.

The Coriolis effect not only works with cannonballs, it also works on winds and ocean currents. It's what makes hurricanes spin around. It's also important on other planets, in stars, and in interstellar clouds.

The Earth's spin causes the wind to curve. This is called the Coriolis Effect, named after Gaspard Coriolis who first worked out the mathematics involved. The wind in the northern hemisphere curves to...more

A thunderstorm in the tropics can grow into a massive hurricane under certain conditions. Sometimes several tropical thunderstorms are able to organize, rotating around a central area of low pressure....more

Turbulence is disordered motion of a fluid. What does disordered mean? Well, as some scientists are fond of saying, "it's hard to define but you'll know it when you see it" (the same can be said for alot...more

Surface ocean currents move in predictable directions over time. However, on a smaller scale, the water in currents moves in complex and variable ways. And those complexities can cause some water to spin...more

The Hadley cell is an atmospheric circulation pattern in the tropics that creates winds called the tropical easterlies and the trade winds. In the Hadley cell, air rises up into the atmosphere at or near...more