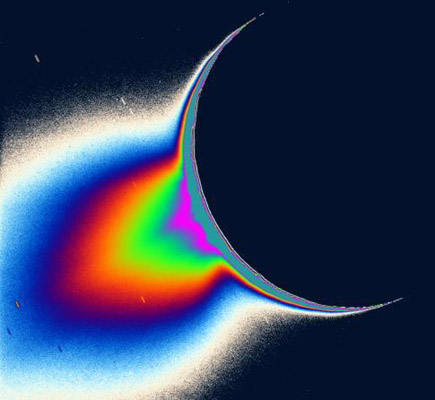 This false-color image shows the plumes of particles, apparently water ice, that Saturn's moon Enceladus spews into space above its South Pole. The image was captured by the Cassini spacecraft. Scientists believe the plumes may be generated by geysers in the fractured terrain around the moon's polar region. The coloring of this image is intended to enhance contrast and allow viewers to see fine details in the structures of the plumes. If viewed by the naked eye, the plumes would appear various shades of white and gray.
Image courtesy NASA/JPL/Space Science Institute.