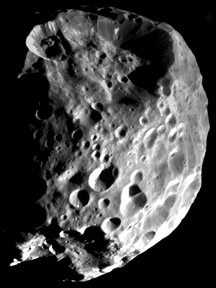 Phoebe is the name of a medium-sized moon of Saturn. An American astronomer named William Henry Pickering discovered Phoebe in 1898. The name "Phoebe" comes from Greek mythology. In the Greek myths, Phoebe was the daughter of Uranus and Gaia and the grandmother of Apollo and Artemis.

Phoebe has a diameter of 220 km (137 miles). It is the ninth largest of Saturn's moons. The surface of Phoebe is very dark. That is strange. Most of Saturn's moons have bright surfaces. Its dark surface isn't the only strange thing about Phoebe.

The Cassini spacecraft is on its way to Saturn. It will zoom close past a strange moon of Saturn named Phoebe. Cassini's close flyby of Phoebe will be on June 11, 2004. The best pictures we have right...more