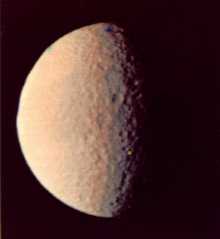 This is an image of Tethys.
Click on image for full size
NASA/JPL

Comparison of Tethys and Earth's moon

Tethys was discovered by G. Cassini in 1684. Tethys is the 8th closest moon to Saturn, with a standoff distance of 294,660 km. It is one of the icy moons, similar to the Galilean satellites. Tethys is about as wide as the length of the Oregon coast, a width of 1050 km (700 miles).

Tethys is has a rather heavily cratered surface, with deep trenches. In appearance, this moon looks very much like Dione, Enceladus, and Rhea.