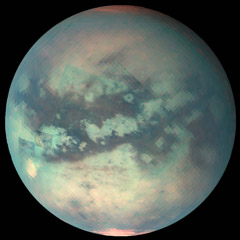 Titan is the largest moon of Saturn. Titan has a very thick atmosphere. That makes it hard to "see" the surface of Titan. In the past, we didn't know much about the surface of Titan. Starting in 2004, the Cassini spacecraft and Huygens lander gathered lots of new data about Titan's surface. We are still learning about Titan, but now we know a lot more than we used to.

The surface of Titan is very, very cold. It is around -180° C (-355° F). Brrrrrr! On Earth, we use a chemical called methane for fuel. Methane is also called "natural gas". Many people have furnaces or ovens that burn methane. On Titan, the cold temperatures turn natural gas into a liquid. There are lakes of liquid methane on Titan! The lakes are mostly near Titan's poles. There might also be rivers or streams of methane on Titan.

A lot of Titan is covered by dunes. Some dunes are 330 meters (over 1,000 feet) high! The dunes are mostly near Titan's equator. There are also hilly areas and even some mountains on Titan. There are a few meteorite craters on Titan, but not very many. Most meteors burn up in Titan's thick atmosphere before they hit the ground.

Titan is Saturn's biggest moon. Titan is the only moon in the Solar System with a thick atmosphere. Titan's poles are interesting places. Scientists have discovered lakes at both of Titan's poles. The...more

Where did the atmosphere come from?

Titan is like other icy moons. Scientists want to know "how come Titan is the only one that has a big atmosphere?" Titan formed the same way other planets did, as shown in this picture. Where Titan formed,...more