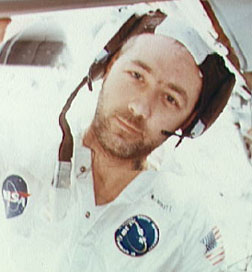 This picture was taken on March 6, 1969. It shows the Apollo 9 commander, James McDivitt, aboard the command module.
Click on image for full size
Courtesy of NASA

There are two type of space missions. Some missions are done by spacecraft that are machines or robots. Other missions have people on the space ships. We call the missions with people onboard "human spaceflight" missions.

The first astronauts and cosmonauts (the Russian word for astronaut) were test pilots who were very familiar with flying in fast and dangerous planes! The first human being to travel into space was Yuri Gagarin (USSR, 1961), followed a month later by the US astronaut Alan Shepard.

Through a sequence of human and robot space mission programs, including Mercury, Gemini, and Apollo, the United States finally succeeded in landing the first people on the Moon in 1969 with Apollo 11!

In 1973, the first American space laboratory was shot into orbit, and scientific experiments began to take place. Between 1973-1981, the United States scheduled only one or two human spaceflight missions.

Finally in 1981, the United States revamped their human spaceflight program with several new missions and brand new spacecraft design, the space shuttle. The space shuttle is a reusable craft.

Now both countries participate in the International Space Station. It opened its doors to its first visitors in November 2000.