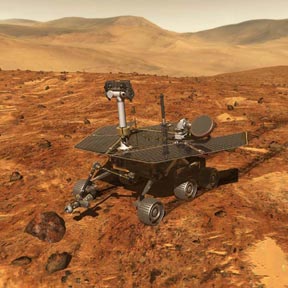 The Mars Exploration Rovers are robot vehicles that are exploring the surface of Mars. The rovers have six-wheels and are powered by solar panels. The rovers are "geologists" that are looking at rocks and soil on Mars. They are trying to find rocks and minerals that might have formed in water.

The rovers are about the size of a golf cart. Each vehicle has a mass of 170 kilograms. Each weighs 375 pounds on Earth. Since the gravity on Mars is weaker, each rover weighs just 140 pounds on Mars.

The rovers aren't very fast. Their top speed is five centimeters (2 inches) per second! They can travel up to 40 meters (130 feet) each Martian day. They probably will not go that far on most days. Instead, they will probably stop pretty often to look around and do tests on rocks. Engineers think the rovers can keep on working for about 90 Martian days. They may travel as far as one kilometer (0.6 miles) during that time.

Each rover has nine cameras! Six of the cameras help the robot steer and keep it from running into rocks or falling into craters. One is a microscope camera that takes close-up views of rocks. Two cameras are on top of a pole that is about as tall as a person. They are giving us views of Mars that are like what we would see if we were standing on Mars!

Each rover has a robot arm. The arm has instruments on it that it uses to examine rocks and soil. Two of those instruments tell us about the kinds of minerals and elements that are in the soil and rocks. The arm has a scraper, called a RAT (Rock Abrasion Tool), which it uses to scrape off the outer surface layer of rocks. After the rock's surface has been scraped clean, the other instruments can look at "fresh" material on the inside of the rock. The microscope camera is also on the arm.