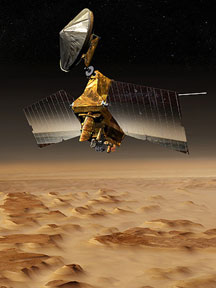 This is an artist's rendition of the Mars Reconnaissance Orbiter (MRO) soaring above the Red Planet.
Click on image for full size
Image courtesy NASA/JPL-Caltech.

Other space missions to Mars

Size comparison of MRO to other Mars orbiters

Mars Reconnaissance Orbiter (MRO) is a NASA space mission to Mars. The MRO spacecraft will study the Red Planet from orbit between November 2006 and November 2008. MRO is by far the largest orbiter sent to Mars so far. It is expected to return more data about Mars than all previous Mars missions combined.

MRO was launched in August 2005. After a seven-month cruise from Earth to Mars, the spacecraft went into orbit around Mars in March 2006. MRO is currently in the midst of a six-month aerobraking phase during which its orbit will be adjusted to one that is good for observing Mars. The mission's science operations phase will begin in November 2006 and will continue until November 2008, lasting more than one full Martian year. After that, MRO will serve as a communications relay satellite for other future Mars missions.

MRO has three cameras for imaging Mars. The largest, HiRISE (High Resolution Imaging Science Experiment), is the most powerful camera ever flown on a planetary exploration mission. Cameras on previous Mars orbiters were able to spot objects the size of a dinner table, while HiRISE will zoom in on features as small as a dinner plate.

One of MRO's other cameras will study the Red Planet's atmosphere, as will a radiometer called the Mars Climate Sounder. MRO also carries a spectrometer, which will map mineral compositions across the surface of Mars. The spacecraft also has a radar, named SHARAD, that will probe beneath the Martian surface for underground deposits of ice.

MRO continues NASA's program of mapping Mars in ever greater detail while continuing the agency's search for water on Mars. The spacecraft will also help lay the groundwork for future missions by scouting out possible landing sites for forthcoming landers, rovers, and eventually human piloted missions to Mars.

Mars Reconnaissance Orbiter (MRO) is a NASA space mission to Mars. The MRO spacecraft will study the Red Planet from orbit between November 2006 and November 2008. MRO is by far the largest orbiter sent...more