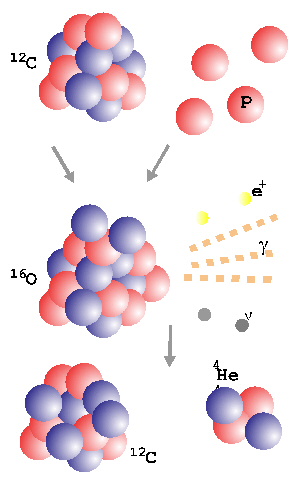 When the temperature of the core of a star reaches about 16 million kelvins the production of Helium occurs through another fusion cycle, called the Carbon-Nitrogen-Oxygen (CNO) cycle. Here Carbon acts as a catalyst, it participates in the reaction but it is not "burned".

The cycle involves a total of four protons that react one after the other with the heavy nucleus (Carbon first). After the first reaction Carbon is turned into Nitrogen, then Oxygen is produced that finally decays back into Carbon emitting an alpha particle (Helium nucleus). During the cycle two neutrinos, three photons and two antielectrons are also emitted. The antielectrons will annihilate with electrons producing two more photons.

Atoms are composed of a massive, central nucleus surrounded by a swarm of fast-moving electrons. The nucleus is made up of protons and, in most cases, neutrons. Almost all of the mass (more than 99%) of...more