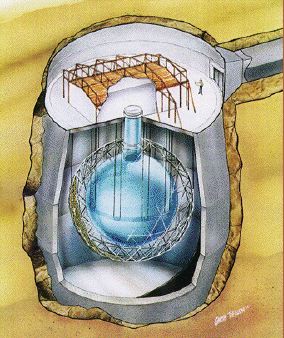 Neutrino interactions with matter are extremely rare, making detection difficult. Neutrino detectors are typically large tanks filled with a fluid that reacts to the passage of neutrinos. To take advantage of the high flux of neutrinos passing through the Earth (billions per second), neutrino detectors are made as large as possible. The larger the detector, the more neutrinos can be measured in a reasonable amount of time. For example the Super-Kamionkande device under construction in Japan is designed to detect about 11,000 neutrinos per year.


Early neutrino detectors were filled with perchloroethane (a type of cleaning fluid containing chlorine). A portion of the chlorine is isotope 37 (17 protons and 20 neutrons), which can react with neutrinos to produce Argon-37 (18 protons and 19 neutrons). The amount of Argon-37 created is then used to measure the neutrino flux.

Another fluid used for neutrino detection is water. Neutrino interactions in water produce the Cherenkov effect. Light emitted in this manner is detected by sensitive detectors surrounding the fluid. Cosmic rays can cause unwanted signals in these detectors. To avoid this problem, the detectors are put deep underground, so that layers of rock can shield the detector from cosmic rays.

Super-Kamiokande is a water Cerenkov detector located in the Kamioka Mozumi mine in Japan. Its use includes proton decay studies, neutrino detection (from the Sun, the atmosphere and supernovae) and muon...more

The Sun, as well as other stars, releases energy in the form of radiation and particles. The processes that produce this energy are taking place in the interior of the Sun, where direct observations are...more

Neutrino interactions with matter are extremely rare, making detection difficult. Neutrino detectors are typically large tanks filled with a fluid that reacts to the passage of neutrinos. To take advantage...more