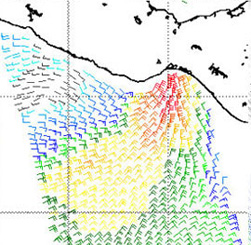 Energy from the Sun affects many things on Earth. One of the main things the Sun does is warm our planet, including the atmosphere. This energy drives much of our weather.

The solar cycle, the rise and fall of the number of sunspots on the Sun, has been known since the mid-19th century. Soon after this discovery scientists started to ask how the solar cycle might affect the Earth's weather.

The solar cycle goes from when the Sun has a minimum number of sunspots (a solar minimum) to when the Sun has a maximum number of sunspots (a solar maximum) back to a minimum. The time between two minimums is about 10.5 to 11 years. Really all aspects of the Sun and solar activity are influenced by the solar cycle. Solar activity (like coronal mass ejections) is more frequent at solar maximums and less frequent at solar minimums.

Scientists tried, but were not able to find correlations between this solar cycle and the Earth's weather. These attempts to find correlations ran into many difficulties. One problem was that weather data quality was variable. Finally, most scientists concluded that there is most likely no significant physical relationship between the solar cycle and Earths weather.

In fact, over time and with more and more studies and better instruments (especially satellites outside the Earth's atmosphere), connections between the solar cycle and Earth's weather have been found more and more unlikely. One exception to this seems to be that solar cosmic rays do affect Earth's cloudiness.