Food chains and food webs give us an overall picture of how an ecosystem works, but usually this picture only includes the organisms, and leaves out the abiotic factors that have a strong influence on the health of an ecosystem.  Ecosystem components such as temperature, winds, moisture, light, and other non-living chemical and physical factors in the environment play an important role in the success of an ecosystem since all the organisms living an ecosystem have evolved to survive in particular abiotic conditions.  Should those conditions change in any way, extinction may threaten a species.  For example, lizards rely on the warmth of the day to raise their body temperatures from the cooler night, and if the temperatures end up being too warm, the lizards will seek shelter, thus limiting the amount of time they have to forage for food or to mate.  In this all-too-typical scenario happening around the world, lizard populations cannot survive.  In this activity you will explore the innate characteristics of lizards that make them susceptible to extinction on a warming planet.

What characteristics of lizards make them susceptible to warming climates?  If lizards are removed from a food web, what are the resulting impacts on the ecosystem?

Read the AAAS news release entitled "As Global Temperatures Rise, the World's Lizards Are Disappearing" and answer the questions below.

4.         Lizards seem to like sunshine and being warm, so what is the issue for lizards if global temperatures rise?

5.         Why does the article state that "it does appear that lizards have crossed a threshold for extinctions—and that their sharp decline will continue for decades at least?"

6.         Describe the methods used by Dr. Sinervo and his colleagues to create a model that studies the effects of global warming on lizard populations.

8.         How did these scientists come to realize that this is a global issue and not a problem in just one country?

10.       Describe the effects of warmer temperatures on the behaviors of a lizard.  How do they adjust? What are the implications of these compensating behaviors and how does this lead to extinction of the species? 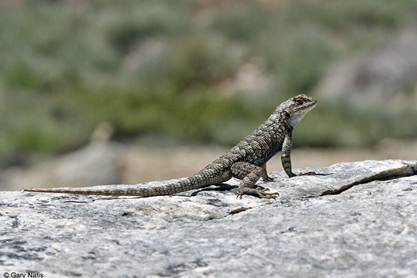 Use reference books or scholarly websites on the Internet to define these terms related to lizards and ecology:

Lizard Lifestyles: Lizard extinctions occur more rapidly in certain species.  Working with a partner and using the definitions from above, choose one of the 2 traits of a lizard that you think makes lizards more susceptible to extinction caused by global warming, explain why, and decide what evidence you need to support your claim.  Place all your responses in the table below.

Now we will investigate additional characteristics of lizards that place them at the brink of extinction on a warming planet.  Read and summarize the content of the following excerpt from Dr. Sinervo and colleagues' paper (2010):

Although Sceloporus lizards are heliotherms that bask and require solar radiation to attain physiologically active body temperatures (Tb), activity in hot weather may result in Tb exceeding CTmax, the critical thermal maximum, leading to death. Lizards retreat to cool refuges rather   than risk death by overheating. However, hours of restriction (hr) in thermal refuges limit foraging, constraining costly metabolic functions like growth, maintenance, and reproduction, there by undermining population growth rates and raising extinction risk. Lizards could evolve higher Tb, but this brings them closer to CTmax, which increases risk of overheating. Extinction risk may increase because of other thermal adaptations. For example, viviparity, which is posited to be a thermal adaptation to cold climates, may elevate extinction risk because high Tb  can compromise embryonic development in utero."  (Sinervo, et al, 2010)

Use the information in above paragraph to analyze the following images: 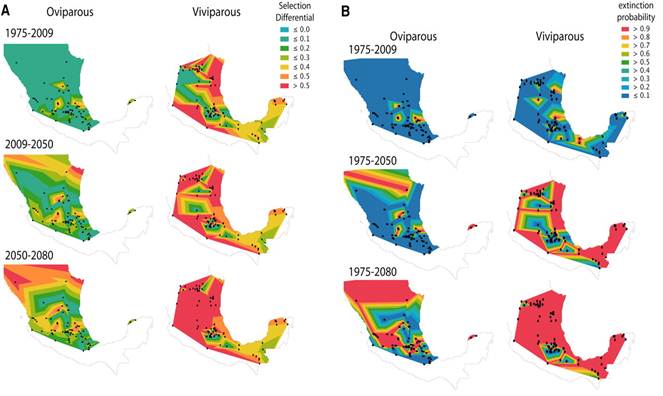 Figure 2: A. Sustained selection differentials per year required for Tb to keep pace with global warming.

1.         From Figure 2.A., which lizards, oviparous or viviparous, have a more difficult time genetically adjusting to warming climates in Mexico?

2.         Refer to a physiographic map of Mexico along with Figure 2.A. and combine elevation with your explanation to the above question.

3.         What is the relationship between selection differential and extinction probability?  What does this suggest about the effectiveness of natural selection in preventing the Sceloporus species from going extinct? 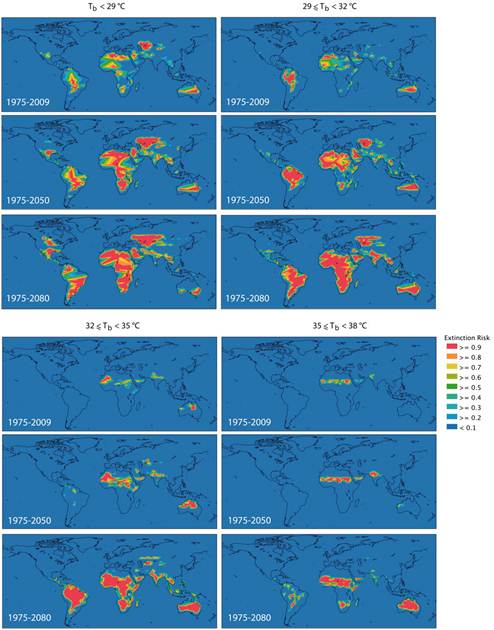 4.         Figure 3 refers to heliothermic lizards and assumes hours of restriction to be 4.55 which is greater than the ideal maximum hours of restriction of less than 3.85 (Sinervo, et al, 2010). Which physiologically active body temperatures (Tb) is at a higher risk of extinction?

5.         Dr. Sinervo describes the extinction of lizards as "canaries in a coal mine" when discussing global warming.  What does he mean by this statement?

Lizards play a vital role in the local food webs in which they live.  Select a California or Mexican lizard species and use the space below to create a before and after extinction food web for the location in which the lizard lives.

With the exception of Alaska, ecosystems in every U.S. state have native lizard species playing a role in their local food webs. Use the Internet and state resources to research one species that lives in your state.  Describe the ideal habitat for the lizard (include biotic and abiotic components), and project what would happen to the species and the local food web should global temperatures rise as predicted.

Implications of global warming on the lizard species and the local food web: