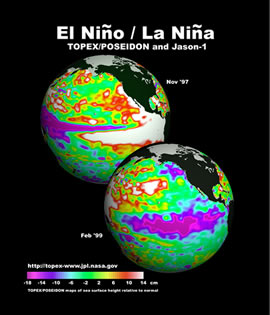 Earth's atmosphere continuously interacts with the other components of the Earth System.

Fundamental Concept 5.1
Earth's atmosphere exchanges energy and matter within the Earth System through physical processes such as photosynthesis, the water cycle, biogeochemical cycles, the rock cycle, and ocean currents.

Fundamental Concept 5.2
Interactions and feedbacks among the components of the Earth System can produce short-term oscillations (such as El Niño and La Niña conditions in the Pacific Ocean), long-term changes in the state of the system (such as global warming), and abrupt, unexpected events (such as sudden release of methane from permafrost).

Fundamental Concept 5.4
As a result of the long time-scales inherent in some Earth System processes, the impacts of some events may be felt only slowly throughout the Earth System and may continue to be influential long after the original event has changes. For example, because of the long time-scale of deep ocean circulation, an abrupt regional change in ocean salinity may take centuries to be reflected in the global circulation of the ocean.