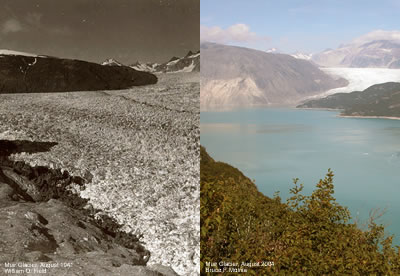 Climate varies over space and time through both natural and man-made processes.

Fundamental Concept 4a.
Climate is determined by the long-term pattern of temperature and precipitation averages and extremes at a location. Climate descriptions can refer to areas that are local, regional, or global in extent. Climate can be described for different time intervals, such as decades, years, seasons, months, or specific dates of the year.

Fundamental Concept 4b.
Climate is not the same thing as weather. Weather is the minute-by-minute variable condition of the atmosphere on a local scale. Climate is a conceptual description of an areas average weather conditions and the extent to which those conditions vary over long time intervals.

Fundamental Concept 4c.
Climate change is a significant and persistent change in an areas average climate conditions or their extremes. Seasonal variations and multi-year cycles (for example, the El Niño Southern Oscillation) that produce warm, cool, wet, or dry periods across different regions are a natural part of climate variability. They do not represent climate change.

Fundamental Concept 4d.
Scientific observations indicate that global climate has changed in the past, is changing now, and will change in the future. The magnitude and direction of this change is not the same at all locations on Earth.

Fundamental Concept 4e.
Based on evidence from tree rings, other natural records, and scientific observations made around the world, Earths average temperature is now warmer than it has been for at least the past 1,300 years. Average temperatures have increased markedly in the past 50 years, especially in the North Polar Region.

Fundamental Concept 4f.
Natural processes driving Earths long-term climate variability do not explain the rapid climate change observed in recent decades. The only explanation that is consistent with all available evidence is that human impacts are playing an increasing role in climate change. Future changes in climate may be rapid compared to historical changes.