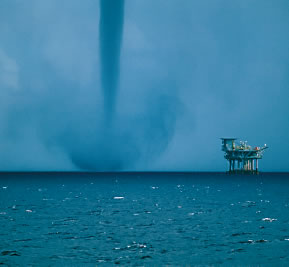 Natural phenomenon: A rotating column of air (similar to a tornado) creates this water spout in the Gulf of Mexico near an offshore oil rig.
Image courtesy of Kip F. Evans

The ocean is a major influence on weather and climate.

Fundamental Concept 3a.
The ocean controls weather and climate by dominating the Earths energy, water and carbon systems.

Fundamental Concept 3b.
The ocean absorbs much of the solar radiation reaching Earth. The ocean loses heat by evaporation. This heat loss drives atmospheric circulation when, after it is released into the atmosphere as water vapor, it condenses and forms rain. Condensation of water evaporated from warm seas provides the energy for hurricanes and cyclones.

Fundamental Concept 3c.
The El Niño Southern Oscillation causes important changes in global weather patterns because it changes the way heat is released to the atmosphere in the Pacific.

Fundamental Concept 3d.
Most rain that falls on land originally evaporated from the tropical ocean.

Fundamental Concept 3e.
The ocean dominates the Earths carbon cycle. Half the primary productivity on Earth takes place in the sunlit layers of the ocean and the ocean absorbs roughly half of all carbon dioxide added to the atmosphere.

Fundamental Concept 3f.
The ocean has had, and will continue to have, a significant influence on climate change by absorbing, storing, and moving heat, carbon and water.

Fundamental Concept 3g.
Changes in the oceans circulation have produced large, abrupt changes in climate during the last 50,000 years.

Sunlight streams into Earth's atmosphere from space. Some is reflected away by clouds and snow-covered landscapes. Light that makes it to the ground is absorbed and heats Earth's surface and oceans. The...more