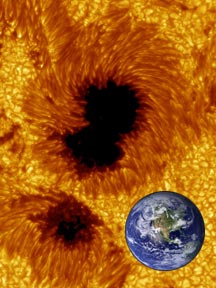 Windows to the Universe staff presented a workshop titled "Radiation Storm vs. the Magnetic Shield: Superheroes of Magnetism and Space Weather Education" at each of the three NSTA Regional Conferences in Kansas City, Baltimore, and Nashville during the fall of 2010. The main elements of this workshop were:

This page provides links to write-ups of the hands-on activities and links to resources (images, animations, etc.) displayed during the workshop.