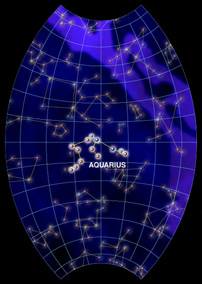 Aquarius is a member of the Zodiac, a group of constellations that the Sun travels through each year. It is best viewed in autumn in the southern sky, although much of the northern hemisphere can see the Waterbearer in the spring. Aquarius is one of the oldest constellations in the sky, allowing time for several different civilizations to create stories about it.

In Greek myth, Aquarius became associated with Ganymede, the young boy abducted by Zeus. Zeus sent his eagle, Aquila, to snatch Ganymede out of the fields where the boy was tending to his sheep. Ganymede would eventually become the cupbearer for the Olympian gods. The constellation, Crater, is often thought to be Ganymede's cup.

The Sumerians also believed that Aquarius brought on a sort of global deluge, which is similar to a flood. Also, many of the stars that make up Aquarius have names that refer to good luck. This is most likely due to the time of year when the Sun would rise in Aquarius. It happened to be at the same time when the rainy season began in the Middle East.

You have to use some imagination to see a figure of a boy in the sky. Look at the constellation in the same position as the one pictured. The head is on the right end. Moving left, you can see what could be an arm dangling down. Continue left more, and you come to the lower torso. Notice the legs are bent. This may represent the position of Ganymede while being carried by Aquila to Mount Olympus.

There are three globular clusters within Aquarius that may be viewed through a small telescope. M2 is located north of Sadalsud, which is the star that makes up the neck of the boy. Its name means "luckiest of the lucky". M72 is right below the head, which consists of the star Albali. Just west of M72 is the planetary nebula named the Saturn Nebula. It is so named because it looks like the planet Saturn when viewed through a telescope. The closest and brightest planetary nebula is the Helix Nebula, located directly east of the "foot".

Ganymede was a son of Tros, first king of the classical land known as Troy. One day Jupiter caught a glimpse of the handsome young boy as he was tending sheep on Mt. Ida, and was suddenly inflamed with...more