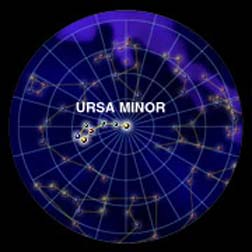 Ursa Minor, also called the Little Dipper, is a circumpolar constellation. This means it never sets in the northern sky. The true figure represented by the stars is the Little Bear. Its counterpart is Ursa Major, or the Great Bear.

There are several mythological stories behind these famous constellations. In Greek myth, Zeus was having an affair with the lovely Callisto. When his wife, Hera, found out she changed Callisto into a bear. Zeus put the bear in the sky along with the Little Bear, which is Callisto's son, Arcas.

A big mystery concerning the two bears is their peculiar long tails. Bears normally have very short tails, so stories were made to explain this difference. In Greek myth, it was told that Zeus swung the bears around by the tails, stretching them out. In some Native American myths, the tails are in fact hunters chasing after their prey. In other myths, the constellation is not a bear at all, but is in fact a dog.

Unfortunately, there aren't as many interesting objects in Ursa Minor as there are in Ursa Major. Probably the most important of all is the last star in the tail. This spot is held by the North Star, Polaris. It sits slightly off the celestial north pole. It is a common misbelief to think that the North Star is the brightest in the sky. It is actually quite dim. It is called the North Star because it never moves from its position in our night sky.

There aren't any nebulae or star clusters present in Ursa Minor. There is a unique circle of stars called the "engagement ring" slightly below Polaris. They can be viewed with binoculars or a telescope. An easy way to find Polaris is by using the pointer stars. Dubhe and Merak make up the right edge of the "bowl" in the Big Dipper. Connect them with a straight line and continue north. You will run right into the North Star.

Draco the dragon is a circumpolar constellation, which means it revolves around the celestial North Pole. It can be seen all year round. Draco can is only present in the Northern Hemisphere, so those...more