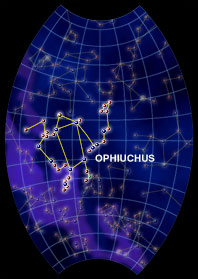 The constellation Ophiuchus represents the Serpent Bearer. This large constellation can be seen in the night sky from June through October. Although most of the stars are dim, Ophiuchus' teapot shape makes it easy to recognize.

The constellation is actually a combination of three different figures. Ophiuchus is holding Serpens Caput in his left hand, and Serpens Cauda in his right. He is located south of Hercules and north of Scorpius.

In Greek myth, Ophiuchus represents the god of medicine, Asclepius. Asclepius was the son of Apollo and was taught by Chiron, the Centaur. One day he killed a snake, but surprisingly another snake came and revived his friend with herbs. From this Asclepius learned the healing power of plants.

The son of Apollo later learned how to bring people back from the dead, which worried Hades. The god of the underworld asked his brother Zeus to kill the medicine god. Zeus did strike him dead, but then put the figure of Asclepius in the sky to honor him.

There aren't many bright stars in this constellation, but there is a rather unique one. RS Ophiuchi is a type of star called a recurrent nova. These strange objects stay dim for long periods of time, and then suddenly brighten. RS is normally an 11th magnitude star, but in 1958 it reached a magnitude of 5.0 for a few days. The brightest star is called Ras Alhague, and is the head of the serpent bearer.

From our view, Ophiuchus seems to be traveling through the Milky Way. This means it should be part of the Zodiac. This also means that it is full of celestial objects. The open cluster IC 4665 is right about Ophiuchus' right shoulder. NGC 6633 is near the tail of Serpens Cauda, and is about 20 degrees across. there are several other clusters, and one nebula. IC 4603-4604 is a diffuse nebula near the star Antares, the constellation Scorpius.