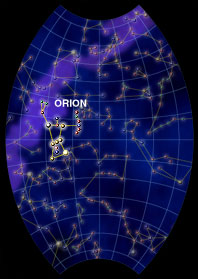 Orion, the Hunter, is by far the most famous seasonal constellation. No other is more distinct or bright as this northern winter constellation. The famous Orion's Belt makes the hunter easy to find in the night sky.

Orion looks very much like a person. First, you should spot Orion's Belt, which is made of three bright stars in a straight line. One of Orion's legs is represented by the bright star Rigel, one of the brightest stars in the night sky. His two shoulders are made of the stars Bellatrix and Betelgeuse. You can see Betelgeuse's reddish color without a telescope. Other bright stars make up the two arms, one which holds a shield, and another that carries a club.

Many different civilizations saw this constellation in the sky. The most famous stories come from Greek and Roman myths. Orion was a famed hunter, and in one story boasted that no creature could kill him. Hera then sent a scorpion to sting the hunter. Orion smashed the animal with his club, but not before he was poisoned. Both are now on opposite sides of the sky. They cannot be seen at the same time.

There are several clusters and nebulae to view in this awesome constellation. The famous Orion Nebula is located in Orion's sword, which hangs from the belt. It is so bright, that even the naked eye can see the fuzzy patch. It looks spectacular even with a small telescope or binoculars. There are numerous other objects in Orion, so scan the constellation with a telescope or binoculars on a clear night!

Two stars, each with the same mass and in orbit around each other, are twins that one would expect to be identical. So astronomers were surprised when they discovered that twin stars in the Orion Nebula...more