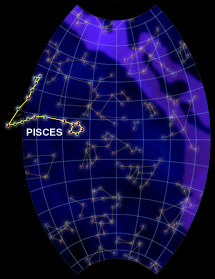 Pisces, the Fish. Can you find the brightest star, Alrisha?
Click on image for full size
Windows to the Universe original image

The constellation Pisces is known as the fish. Almost every ancient civilization saw this figure. Some saw the figure as a single fish, others saw it as a pair. Pisces can be found during the months of September through January.

In Greek mythology, the two fish represent Aphrodite and her son, Eros. One day they were fleeing the giant Typhon, when they jumped into a stream, turned to fish and swam away. It is said they tied a string to their tails so they could stay together. Even the constellation shows this long string shared between them.

The easternmost fish is located just below Andromeda. The westernmost is below Pegasus. The string starts with the eastern fish and travels south towards Cetus before heading west to connect with the other fish.

The constellation Cetus represents the Sea Monster. It is one of the largest constellations known. In classical civilizations, the figure was the giant sea monster that almost ate Andromeda. King Cepheus...more

What's in a Name: Arabic for "the knot". Claim to Fame: Brightest star in Pisces. The corner of the "V" shape, which is the line that holds the two fish together. Type of Star: White Main Sequence Star...more